It seemed like a 2-horse race between MacDuffie and Worcester all the way up until the two teams faced off in late-January. But it eventually turned into a conference that saw their top-5 teams finish with records that fell somewhere between 13-2 and 15-4.

You could make an argument that the overall team talent level fall off and get a little murky after the top-5, but I’ll guarantee you that none of those 5 teams will volunteer to play a #6 Gould squad featuring Northwestern-bound PG/Wing Dan Buie or #8 Tilton’s talented core who would even sound intimidating if you had to face them in a court of law. (“Are you suffering from extreme embarrassment due to an ankle-breaking crossover? Are you currently sidelined and afraid to show your face in public after falling victim to a violent mid-air assault? Don’t just sit there. Call now and let the Law Offices of Selden, Beckett, Leach, Layman and McCoy fight for your rights!” It would be a good commercial, at the very least.) 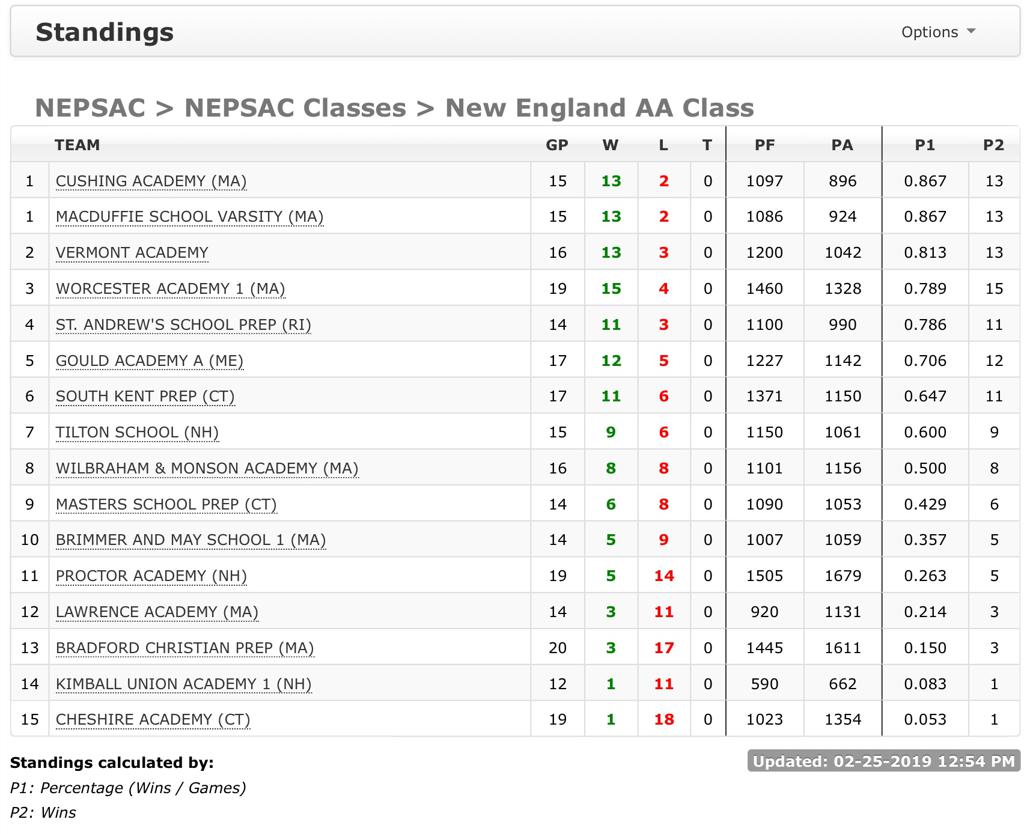 The AA regular season was filled with pile-ups at the top of the standings, surprising wins from teams that didn’t look the part on paper and defining moments that put the top-8 teams in their current postseason positions. Unfortunately, nobody put together a resume that was deemed worthy of an invite to the 2019 National Prep Championship, which means this year’s conference tournament will be the end of the road for everyone in the AA field.

It’s been a few years since the stakes were this high and this definitive in AA. The result is a cruel, simple and beautiful thing if you’re looking at it from a player’s, coach’s or scout’s perspective:

8 teams playing for 1 trophy. Winners stay, play and make plans for Western New England on Saturday. Losers go home, season over and the ticket is $10 at the door like everyone else. By the end of the weekend, only one team will earn the right to call themselves the 2019 NEPSAC AA Champs.

These two teams squared off on January 25th and Tilton protected their home turf on a Friday night. Their top-6 rotation players –Jalen Leach (16pts), Eric Beckett (13), Johnny McCoy (12), Cem Kircimen (11), Kyle Layman (11), Anthony Selden (11)- each finished with 11-or-more points in an 84-65 beating of the eventual-#1 seed. It prompted HC Mike Hart to fire off this tweet postgame….

Dropped an 84-65 decision @TiltonBVHoops. They shot probably 70% from field and dominated on defense. We are now driving to the North Conway area and @GouldAthletics tomorrow. Road warriors!!

It could also be viewed as the start of a turning point in St. Andrew’s season. Hart’s squad would go on to win ten of their next 11 conference games and build a resume that included wins over MacDuffie, Vermont, Cushing and Worcester. They are the only team within AA’s top-5 that can boast wins over the other four this year, which undoubtedly became one of the strongest factors in The Commission making them the tourney's top seed. With one of New England’s best prospects –Syracuse-pledge Brycen Goodine- leading the way and an underrated supporting cast perfecting their individual roles within a strong team concept, St. Andrew’s rolled to a 11-3 record in AA.

PREDICTION: Everything in this matchup tells me to go with the home team. The Revenge Factor. The Best Player Factor. The HartBreaker Factor, which accounts for at least one jacket toss, three one-liners and a handful of entertaining, crowd-provoking moments on the sidelines. But it’s also a brutal matchup for Hart’s crew. Selden, Beckett and Leach are coming in with even more confidence than they had a month ago. After starting 4-4 in-conference, Marcus O’Neil’s team won five of their last 7 games by an average margin of 17.4 points. The two losses were to #2 MacDuffie and a hot Gould team. And while Goodine will be the best player on the court hands-down, Tilton might have 5 of the best 7 overall players in this game. It’s a tough call but I’m gonna give Hart some bulletin board material….

This is a matchup of two teams that were trending in opposite directions all season long. While Worcester was racing out to a 9-0 record in AA and earning the #9 spot in The Hustle’s National Prep Coaches Poll on the strength of their overall 13-0 record, Vermont was crawling out to a 1-2 record in AA and an 8-5 record overall. While Worcester was hitting their midseason skid and battling to finish 15-4 in-conference and 20-6 overall, Vermont was hitting their stride and ripping off 12 wins in their final 13 conference matchups and finishing with a strong 13-3 AA record. Yet, you might be able to toss all of that BS directly out the window when the ball goes up on Wednesday afternoon.

Worcester earned home court with their strong showing out of the gates. Their student section is one of the best in the NEPSAC and isn’t afraid to get in an opposing player’s ear. Exactly the way it should be! Symir Torrence has set the stat sheet on fire lately and finished the regular season with 20 points, 12 rebounds and 10 assists against Brewster. Harvard-commit Tommy O’Neil gives Torrence a reliable wingman who can also take over a game when called upon. Meanwhile, a well-rounded band of misfits has made Worcester one of the most enjoyable squads to watch when they’re all on the same page.

PREDICTION: First of all, this has the makings to be the best 1st Round matchup in the NEPSAC playoffs, regardless of conference. The battle between O’Neil and Mitch Doherty should be a wash. Same when you compare wing personnel with VA’s Travis Evee and WA’s Jordan McAllister. Shooting and the Point Guard position may tell the story. If Worcester can get an outstanding defensive performance out of Quest Harris, who will be responsible for containing Torrence, they’ll be able to control things offensively default. But it’s never that simple. Torrence’s confidence is at an all-time high, with his team’s win total and his personal stats reflecting that accurately. That said, home court also means something at this time of year and it’s going to take an exceptional performance on the road from Torrence and Co. to walk out of Worcester with a win. That leaves us with the shooting factor and Worcester has one dude that has gone virtually unaccounted for all season long: Judson Martindale. Coming into the season, you were more likely to hear someone piss-&-moan about Martindale’s attitude and perceived arrogance rather than his reliable jump shot and athleticism at the rack. Now that the jump shot and athleticism has yeilded consistent high-level production, the arrogance has turned into real confidence and Martindale’s game speaks for itself. Watching the 6’7” wing become such a dangerous player -and recognizing the way his teammates now celebrate his success with him- has been one of my favorite developments of the ’18-’19 season. I fully expect him to be the X-factor once again.  These two teams split the season series, with each team winning on their home court. I’m gonna stick with the trend….

MacDuffie had their fair share of clunkers throughout the ’18-’19 season and if you asked HC Jacque Rivera whether or not he was upset about his team’s inability to lock up a National Prep Championship bid, I’m sure you’d receive a resounding “YES” as his response. But those clunkers never came in AA action -when Rivera had a healthy roster- and this program’s sights are still dead set on achieving one of their main goals heading into the season. UConn-bound James Bouknight, Wake Forest-pledge Ismael Massoud and Richie Springs, New England’s top prospect in 2020, should enter the postseason with a chip on their shoulder and some unfinished business to settle.

Standing in their way is a Gould squad that won six of their last 7 conference games and might just be peaking at the right time. Led by one of the region’s most explosive scorers and a high-major interior presence, MacDuffie would be foolish to take them lightly. Northwestern-signee Daniel Buie has the ability to rip off a 40-piece on anyone, at anytime, in any gym and the young man doesn’t exactly give a damn who’s wearing the opposing jersey. Wildens Leveque (South Carolina) gives Buie an inside man to rely on as the perfect compliment to the  handful of shooters-&-slashers that fill out the Gould rotation.

PREDICTION: If Bouknight and Massoud are back to 100% health, come out fully engaged mentally and are genuinely determined to end their prep careers on a high note, there isn’t a team in AA that can stop them. If they mess around and take Boo’s Crew lightly, they’ll get slapped in the mouth hard-&-fast right out the gate and they'll be forced to scramble. But I don’t expect the latter to happen and, until I’m given a reason to believe otherwise, I won’t be picking against MacDuffie as long as they’re still in the mix....

Cushing HC James Cormier believes his team deserved a chance to play against the nation’s best and that they earned a bid into the 2019 National Prep Championship next week at Conn College. As winners of 11 of their last 12 games and sporting a 22-4 overall record in ’18-’19, Cushing (13-2 in AA)  has a legitimate beef. That said, if their focus remains on what they didn’t receive earlier in the week, they’re going to end their week -and their season- by receiving a beating at the hands of South Kent. With a talented group of level-headed cats, the mental preparedness of Cormier’s crew shouldn’t come into question and their physical abilities should be on full display.

They’ll be facing a team that had to fight tooth-&-nail to get to this point and aren’t afraid to scrape out a win by any means necessary. HC Bill Barton, who speaks with a refreshing honesty when it comes to his players, has heaped praise on post-grad Sean Bresnan from the season’s opening tip. The 6’5” do-it-all grinder continues to give SKS (11-6) a reliable presence on a nightly basis. Along with the ever-improving wing tandem of Mekhi Gray and Josh Reaves, South Kent is guaranteed to do one thing in the 1st Round: Play like they’ve got nothing to lose. And a team like that is dangerous, especially in the postseason.

PREDICTION: South Kent actually owns the head-to-head advantage over Cushing this season, thanks to a 60-53 win in early-December. But Cushing’s talented young bucks have gained invaluable NEPSAC experience over the course of the season and their level of play has risen to the occasion. Bensley Joseph, a 6’1” Point Guard and one of 2021’s top prospects, plays with a maturity well beyond his years and provides a calming influence at the most important times. Along with Alexis Reyes and Malachi Ndur, the time is now for Cormier’s youth to turn their vast potential into strong production. It’s also time for a talented vet to put the finishing touches on a tremendous season and end his Cushing career with some noise. 6’5” wing Daman Tate, who is one of the most talented uncommitted 2019 prospects in New England, will be given every opportunity to put his fingerprints on Cushing’s postseason run and I really expect him to take advantage of the stage this week. South Kent won’t make it easy and Bresnan will leave his heart out on the floor but…..

CHECK BACK IN BEFORE THE SEMI-FINALS FOR PREVIEWS OF THE AAA, AA & A TOURNEYS, ALONG WITH PREDICTIONS  FOR THE NEPSAC FINALS THIS WEEKEND @ WESTERN NEW ENGLAND COLLEGE..... 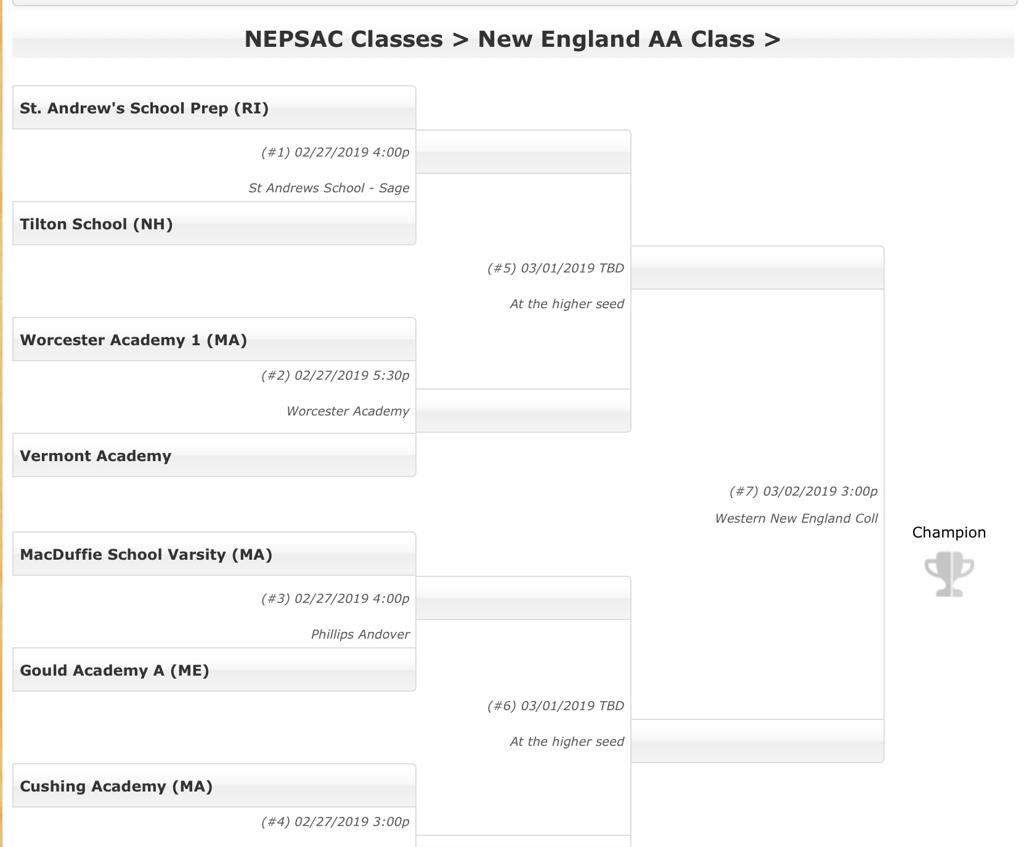