At the start of the preseason, it would’ve been pretty easy to convince yourself that the NEPSAC’s top conference was going to be a two horse race. Fast forward four months and there’s only one thing that has become abundantly clear about the AAA postseason picture: It’s as wide open as it’s ever been. 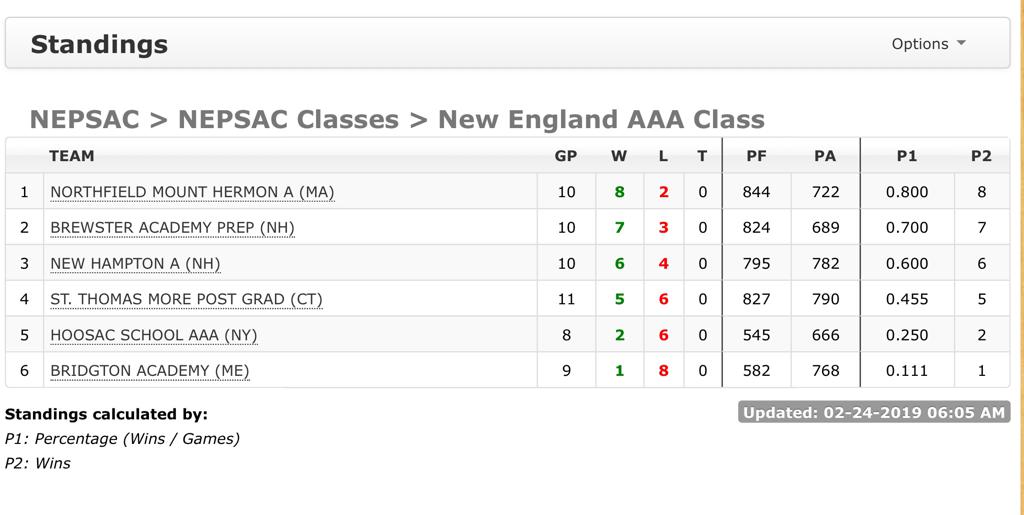 #1-seed Northfield-Mt Hermon finished with an 8-2 record in AAA play, with their losses coming to Brewster early in the season and to Hoosac last Wednesday. They’ll square off against the winner of the St Thomas More vs Hoosac matchup.  #2 Brewster (7-3) also earned a 1st Round bye and will face the winner of the New Hampton-Bridgton showdown.

Hoosac (2-6) only finished with two AAA wins but they came against Brewster (81-80) and NMH (91-87), proving that this first-year AAA program has enough firepower to hang with anybody. They also own a 2-point win over Vermont (94-92) and a 2-point loss to New Hampton (72-70), giving them some experience in tight situations against quality teams. And none of those games should be considered flukes. Skilled 6’10” big man Mileta Boskovic can hold his own in the post but can also knock down open looks out to the top of the arch. With Marko Sarenac as a constant long-range threat and Nikola Blaskovic as a steady floor general, Hoosac has the ability to keep games close and strike once their opponents least expect it.

If this matchup comes down to experience, St Thomas More will win in a route. Matter of fact, they’d beat every prep program in America since head coach Jere Quinn carries 1,000+ wins into every game. Like their coach, this year’s STM squad will enter postseason play with a chip on their shoulder and something to prove. This could be the last opportunity for Wayne Bristol Jr, Nick MacDonald and Ryo Kobyoshi to make in-game statements to D1 coaches while wearing the Chancellors uniform.

PREDICTION: As long as STM controls the pace and dictates the game’s physicality in the post, they should be able to overcome whatever Hoosac throws their way. Since the ball is likely to be in the ever-improving hands of Jair Currie and Brendan McGuire during the game’s most crucial moments, I’m confident that STM will be able to handle their business. As far as the physicality in the post in concerned, the duo of Jared Garcia and Fordham-bound big man Joel Soriano are well-equipped to set the tone.

Nick Whitmore’s crew (6-4 in AAA play) has battled through everything-&-anything throughout the ’18-’19 season and will still enter the AAA tourney with enough left in their tank to ruin somebody’s plans for the weekend. Mika Adams-Woods has used every ounce of grit and determination in his body to guide the NH ship through rocky waters. It’s to the point that he could now be considered the Point Guard equivalent to the Navy’s USS Iowa (peep these pics!) The Nebraska-bound floor general hasn’t done it as a solo act by any means. Instead, he’s done what true Point Guards and real leaders do: Empowered his teammates, put them in positions to succeed and shown them that they can play at a higher level than they previously believed. The biggest beneficiary has been Max Davis, a 6’5” wing with a funky delivery that steadily grew into the most welcomed and beautiful sight imaginable for Whitmore & Co. over the course of the season. Davis has stepped up on multiple occasions, knocked down handfuls of triples at a clip and may have even played himself into scholarship consideration. Given additional responsibility, Bas Leyte has emerged as one of the best prospects in New England’s 2020 Class, with an energy level and toughness that has grown to match his vast skillset.

Bridgton (1-8) grabbed their lone AAA win against St Thomas More in late-January and owns the worst point differential in the conference, having been out-scored by their AAA opponents by 186 points this season. Whit Lesure will undoubtedly call upon the services of Kelton Samore, a 6’9” inside-outside threat who has put up some of the biggest individual performances in AAA this year, and he’ll need everything Samore can bring to the table in order to advance.

PREDICTION: In any other season and with any other team, I’d be likely to pick Bridgton to score an upset in the 1st Round of the AAA tourney. This is the type of game that really good teams commonly overlook and start thinking about their next opponent instead of focusing on the task at hand. But this year’s New Hampton squad has learned not to take anything for granted. They recognize that they can get snake bitten by any team in New England if they don’t prepare and respect the hell out of their opponent. But they've also realized that they belong on the floor against the nation’s best when they’re playing together and dictating the pace. Whitmore, Adams-Woods and Leyte have fought way too hard this season to get derailed in the 1st Round. I fully expect them to come out firing on all cylinders and advance to the semis to square off against Brewster on Friday night.

CHECK BACK IN BEFORE THE SEMI-FINALS FOR PREVIEWS OF THE AAA, AA & A TOURNEYS, ALONG WITH PREDICTIONS  FOR THE NEPSAC FINALS THIS WEEKEND @ WESTERN NEW ENGLAND COLLEGE..... 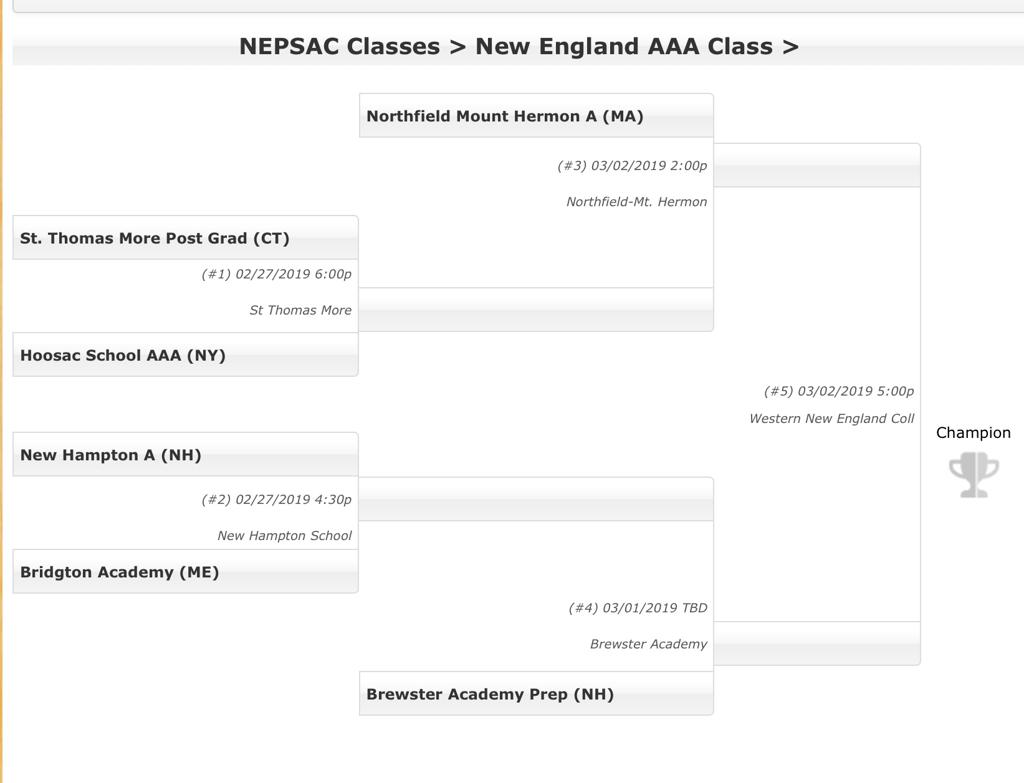 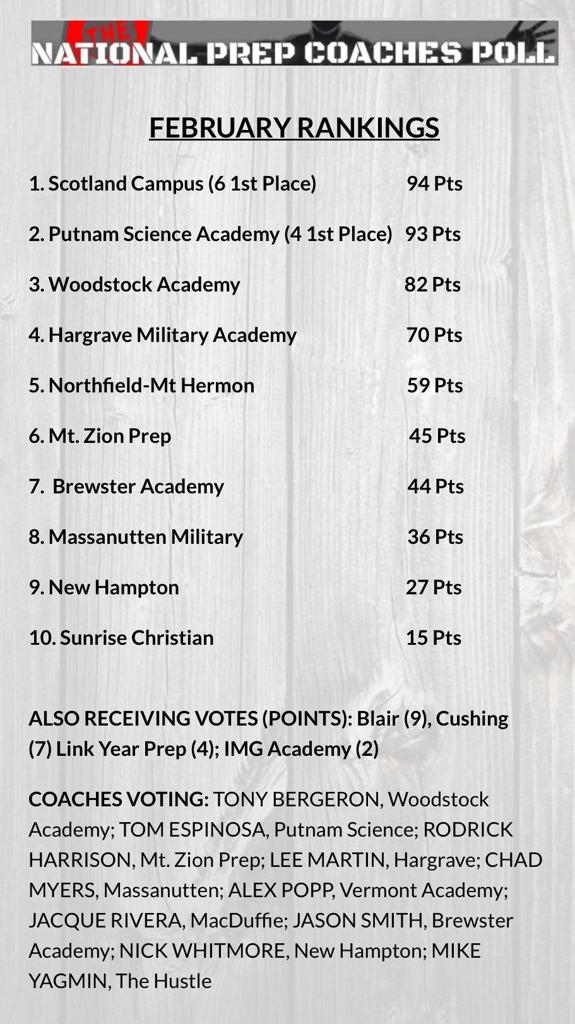