December’s edition of the ’18-’19 National Prep Coaches Poll will be out on Friday after all the votes are cast. After a handful of surprising results wreaked havoc on the preseason poll, here’s how the top-10 fared to start their season and a glance at what their short-term future holds.

BREAKDOWN: I figured one of the top-10 teams would struggle and we’d be able to use them as the example as to why a monthly poll is best suited for what we’re trying to do. But I didn’t think it would be our preseason #1. It’s crazy to judge any team on a 2-game performance early in the year but it’s asinine to make definitive statements about Brewster after their losses in the National Prep Showcase. Granted, if they don’t bond together, start appreciating one another’s talents and celebrating each other’s success, it will be a long and befuddling year for Jason Smith. I’m just not willing to bet against a Brewster team with this much size, skill and athleticism. Immediately overreacting to those losses would’ve made us another media list filled with hyperbole and doomsday references. I’d be surprised if our poll reflects that on Friday, now that we’ve had some time to digest the situation. A few players will have to sacrifice, a few will have to step up and someone will have to take ownership of this Brewster squad. If Smith is lucky, his leader will recognize the need to do all three at different times along the way. The talent is there for a special season, it would be an absolute shame to waste it.

BREAKDOWN: Even with the loss of Akok Akok, who decided to enroll at UConn for the 2nd semester, this Putnam team has everything it needs to make another National Championship run. The backcourt duo of Tyson Etienne and Hassan Diarra have been sensational to start the season. Etienne has provided a calming influence on the perimeter as a reliable knockdown shooter and 3-level scorer. Diarra has done whatever this team needs, everything from playing a facilitating true Point Guard role to a slashing/shooting bucket-getter when the PSA offense becomes stale. Putnam is running like a well-oiled machine right now, outscoring opponents by an average of 103-69 on a nightly basis. They’ve got a 3-game stretch coming up against Westtown, Our Savior Lutheran and The Patrick School that starts at the PSA Cardinals Prep Showcase this weekend in Pottstown, PA.

STOCK: RED HOT & TO THE TOP OF THE MARKET

BREAKDOWN: Trey Anderson was one of the most underrated players in New England heading into the Thanksgiving break. But his visit and subsequent signing with South Carolina over the break got rid of all that. His two-way versatility has been a big reason why Woodstock has been able to win games in multiple styles, whether they have to grind them out or play at a breakneck pace. They have the floor general (Noah Fernandes) and the man in the middle (Tre Mitchell) to go along with great depth (8 players have already signed with D1 programs). All that and they haven’t come anywhere close to playing their best basketball yet. All signs are currently pointing to a collision course with Putnam at some point in the postseason but we’ve got a long way to go and a ton of potholes in the road.

STOCK: PUBLIC MONEY HOPING FOR THE SIDELINE GRINCH TO BUST BEFORE X-MAS.....SMART MONEY IS ON A CONTINUED BOOM!

BREAKDOWN: Unless you were expecting an undefeated season, Hargrave is right about where our coaches expected them to be at this point. Lee Martin’s squad is going to do some damage this season, led by point guard Giovanni Santiago and an abundance of skill on the perimeter. They’ll play in the FUMA Invitational next weekend and will also host an invitational tourney of their own in January. Hargrave is currently outscoring their opponents 112-81 on a nightly basis.

BREAKDOWN: In a similar position as Hargrave and will also compete in the FUMA Invitational this weekend. Massanutten will host their leg of the 3-tourney combo in February. The majority of their games will take place outside of New England and without any New England programs heading down south. That’s something we’ve gotta change, for all three of the military programs. We’ll figure that out later. Right now though, Chad Myers’ squad is scoring 93 points a night while only giving up 68.

BREAKDOWN: John Carroll’s crew got tripped up against Scotland but one thing is becoming clearer with each passing game: Chris Ledlum is a monster. The Harvard-bound wing is capable of strapping NMH to his back and carrying them to victory with his versatile offensive skillset. Dates with Perkiomen and Master’s followed by a pair of Canadian squads at the BasketBull HoopFest are on tap. They’ll get into the heart of their NEPSAC schedule after returning from break.

STOCK: COULD SLIDE SHORT-TERM, BUT STILL SUCH A SAFE BUY

BREAKDOWN: They struggled to start the season after the loss of their head coach undoubtedly shook things up. They’ll have a chance to regain some momentum later this month when they play rival Montverde, followed by matchups against MacDuffie and Sunrise at the BasketBull HoopFest. As long as Lester Quinones and Terrence Shannon take the court, IMG has a chance to win.

STOCK: VOLATILE, IN NEED OF A JOLT

BREAKDOWN: Another team that will likely fall out of the top-10 after starting off 2-3. They’ll try to get back on track against in-state rival IMG before heading up to New Jersey for the Hoop Group Tip-Off in the middle of December.

STOCK: DOWN, MAY NEED TO USE INTERNATIONAL MARKET FOR A BOOST

BREAKDOWN: This team is DANGEROUS! Everyone got a glimpse of Malik Hall, Tray Jackson and Shereef Mitchell at the National Prep Showcase and immediately realized they were an underrated outfit in our preseason rankings. Don’t expect that to happen when December’s poll comes out on Friday. They’ll head back up to New England for the BasketBull HoopFest to play IMG and another opponent that hasn’t been announced. This team could rise substantially as the season unfolds.

BREAKDOWN: What Scotland will lack in regional opponents, they make up for with big time wins over NMH and MacDuffie at the National Prep Showcase. Chaney’s crew has some real talent and are bound to improve as the year goes on. They have a huge matchup with Our Savior Lutheran at the PSA Cardinals Prep Showcase this weekend. Karim Coulibaly and Judah Jordan have been one of the best inside-outside combos in the nation so far.

STOCK: CHANEY’S  LOOKING FOR HOSTILE TAKEOVERS…. BUY BEFORE IT GETS UGLY

UNRANKED TO START THE SEASON…..

BREAKDOWN: This is another huge week for Nick Whitmore’s Huskies, as they look to cement their status as a heavy hitter on the national level this season.  After two huge wins at the National Prep Showcase, Mika Adams-Woods and Co. will be put to the test in matchups with Brewster (Wed), Bridgton (Fri) and Loomis Chaffee (Sun) at the Scholar Roundball Classic. They follow it up with a game against Woodstock on Dec. 14th at the BasketBull HoopFest. This team has all the weapons to make one hell of a run before the Christmas break but they can’t cheat the process by looking any further than the next game if they’re going to make it happen.

BREAKDOWN: They’ve already shown the ability to beat anyone on any given night this year. Ayinde Hikim has become one of the early season’s biggest risers, picking up offers from LaSalle and St. Peter’s in the process. As the word gets out, more offers will come flying in.  Hikim has a ton of toughness and talent surrounding him on the wings with Robert Carpenter and Woody Newton leading the way. We won’t see Rodrick Harrison’s squad back in New England until the New Year when they square off against St. Thomas More and Putnam Science in early January. Mt Zion is winning by an average score of 81-63.

STOCK: SKEPTICS CAN’T SEE THE VISION…BUT IT'S CLEAR TO THOSE ALREADY ON BOARD: HOP IN OR GET RUN OVER!

BREAKDOWN: Mitch Doherty is this team’s Al Horford. He’s efficient, unselfish and quietly beats you into submission without any windmill dunks or jaw-dropping highlights. He’s surrounded by shooters and one of the best mid-range players in the region, Jordan McAllister. They look primed for a big season in AA and will be out to prove it when they face Tilton on Wednesday night.

BREAKDOWN: Still somewhat of an unknown as they got beat up by Sunrise and trailed for the entire game against Worcester at the National Prep Showcase. You have to give them credit for bouncing back and beating Brewster, a win that should look better as we get later in the season.

STOCK: STILL TOO MUCH OF AN UNKNOWN COMMODITY BUT THEY MADE A SOUND INITIAL STATEMENT

BREAKDOWN: With three of the best players in New England on the roster –James Bouknight, Ismael Massoud and Richie Springs- along with a supporting cast that probably doesn’t get enough credit, MacDuffie has the horses to contend with anyone in the country. They’ll match up against Blair at the PSA Cardinals Prep Showcase this weekend and get a crack at IMG later in the month at the BasketBull HoopFest. 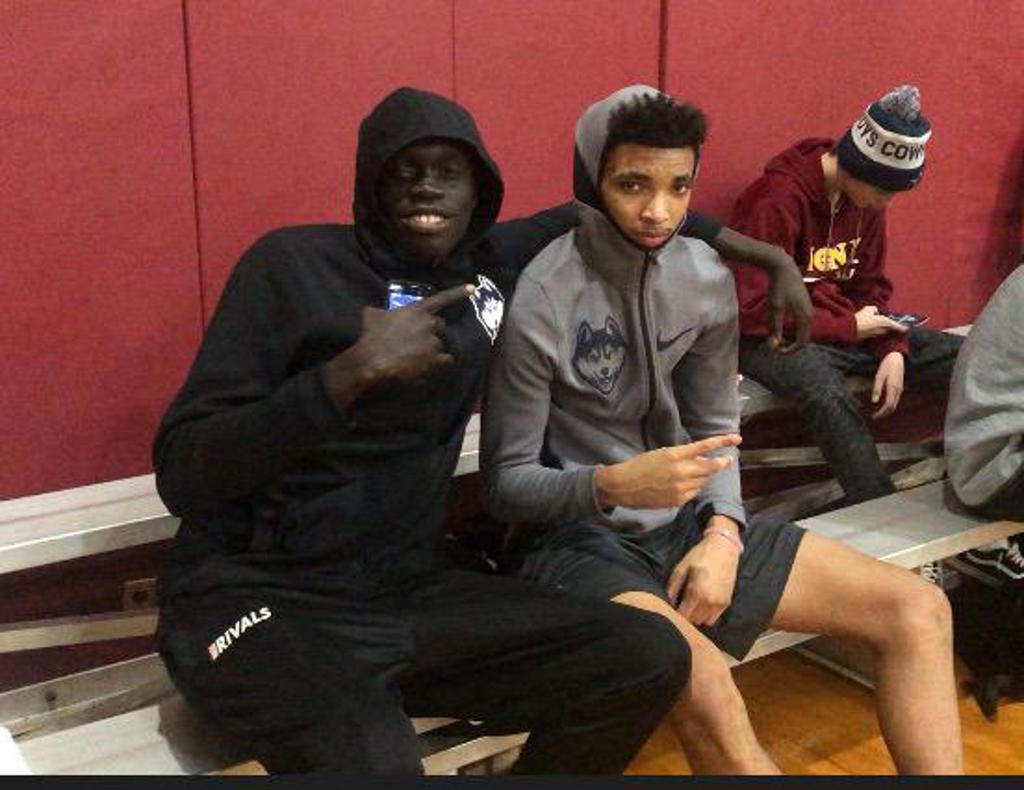 FUMA, ST. THOMAS MORE COULD WORK THEIR WAY INTO THE RANKINGS 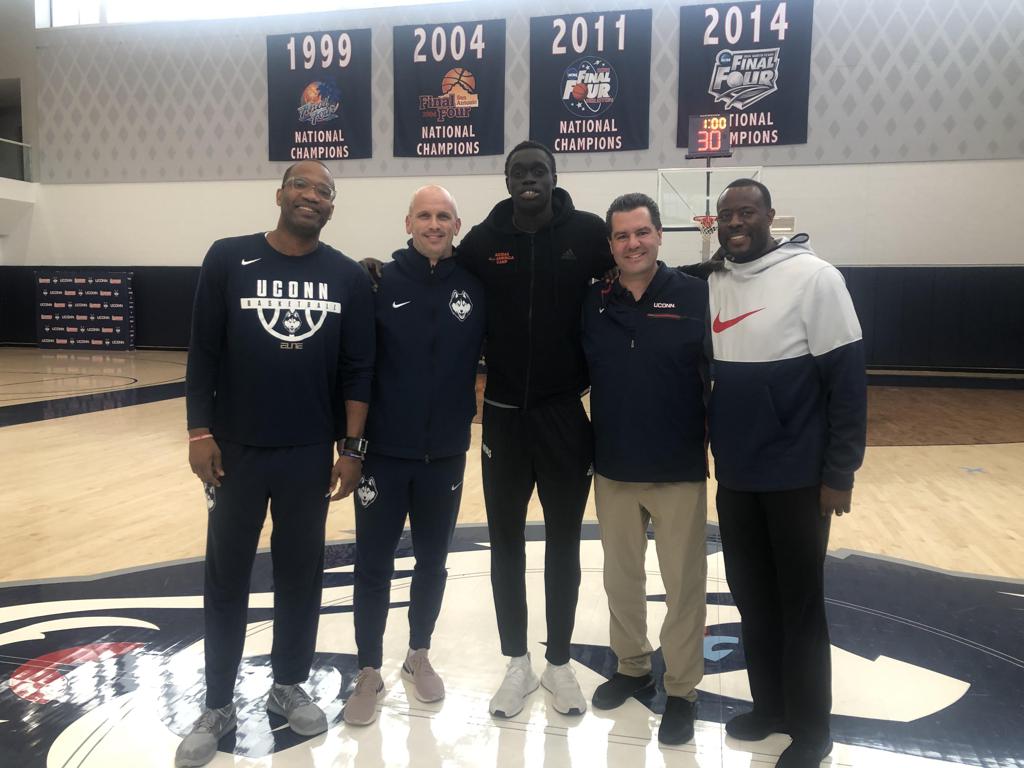