If you’re looking for an early March Madness fix before the Big Dance kicks off, the NEPSAC Conference Tournaments are here to deliver the goods. Here’s a preview of this weekend’s semi-final matchups…

St Thomas More heads into the semi’s fresh off a 100-80 win over Bridgton in the 1st Round on Wednesday. Jere Quinn’s crew busted out the gates with a 23-1 start to the season but have alternated wins-&-losses over their last seven contests. STM certainly won’t lack confidence heading into this matchup. Jared Garcia and Co. took Brewster down to the wire in early-December and owned a lead late in the 2nd half before ultimately falling 82-81.

Opponents have attacked Brewster with a simple gameplan throughout the season: Divide-&-Conquer then watch them defeat themselves. It lacks originality but it’s been the most effective way to frustrate the defending-National Champs and nobody is better at playing the “overmatched underdog who’s just trying to compete” role than Quinn.

While STM almost pulled off an upset in their first meeting, Brewster rose to the occasion in the rematch and came away with a 93-65 win at home. I wouldn’t anticipate that wide of a final margin this weekend.

New Hampton beat everyone in AAA at least once en route to a 9-3 conference record and a 2-seed in the tourney. Andrew Gale’s team knocked off Vermont (82-77) in the 1st Round and have won 5 of their last 6 games overall. 6’7” jack-of-all-trades wing Jahmyl Telfort is an unselfish two-way weapon who can comfortably play the role of distributor or bucket-getter depending on what his team needs. 6’2” Kerem Ozturk provides a veteran presence as a floor general while 6’8” wing Alex Karaban has been the most productive 2022 prospect in AAA throughout the season.

NMH enters this one on a 3-game win streak and have averaged 108 points per game along the way. HC John Carroll handed the keys to his offense over to Darius Ervin at the beginning of the season and the electric 5’9” floor general has taken full advantage of the opportunity. Ervin heads into the weekend averaging 18.1 points, 4.7 rebounds, 3.8 assists and 1.1 steals with uber-efficient shooting slashes of 50% FG/51% 3pt/90% FT on the season.

These two teams split the season series by winning on the other’s home floor. While NMH has locked up an invitation to the National Prep Championship next week at Connecticut College, winning the AAA title would mean everything to New Hampton.

Cushing is trying to put the finishing touches on one of the best seasons in recent AA history. James Cormier’s outfit became the first AA program to finish the regular season with an undefeated conference record since Tilton pulled it off during the ’14-’15 season. Bensley Joseph leads a balanced offensive attack that prides itself on creating space and dictating the pace, regardless of who they’re squaring off against. Joseph's development can't be understated as he has to be considered New England's premier Point Guard prospect in 2021. Malachi Ndur (Brown) has become a legitimate perimeter weapon while 6’7” wing Toby Okani, 6’8” wing Alexis Reyes and 6’2” pitbull Isaiah Gray (Cornell) have the ability to carry the offense for stretches as well.

While Cushing’s strength is on the perimeter, W&M wants to punish opponents with their size. Criminally underrated 6’8” big John Adams has been a reliable offensive weapon in the NEPSAC for three years and he was joined by one of the most gifted prospects in the Northeast for his final campaign. Versatile 7’ big Kyle Filipowski has as much long-term potential as any prospect in the region and that potential is already yielding consistent high-level production. The versatility of both Adams and Filipowski has been a nightmare for W&M’s opponents this season.

Worcester’s talented group of 2020 prospects will be walking around with a giant chip on their shoulder until they get an opportunity to avenge the beatdown they received from Cushing on their Senior Day. They can’t look too far ahead to a possible rematch and that’s where the rock steady leadership of Quest Harris comes into play. The rugged 6’ point guard has kept his talented teammates fed throughout the season and they’ll look to him to guide them to victory once again. Dasonte Bowen, who teams with Harris to form one of New England’s best backcourts, has been banged up recently and a healthy version of the 6’3” sophomore would be a game-changer for Worcester in this matchup.

St. Andrew’s has found different ways to win close games throughout the season and if you told HC Mike Hart that his team would be within striking distance with 5:00 left on the clock, he’d love his chances of pulling off the upset. Butler-signee Myles Wilmoth has shown flashes of his prodigious talent over the course of the season but hasn’t put together that one career-defining performance yet. Wilmoth should be a motivated young man heading into the weekend.

The only meeting between these two teams during the regular season saw Worcester walk away with a 74-71 win. 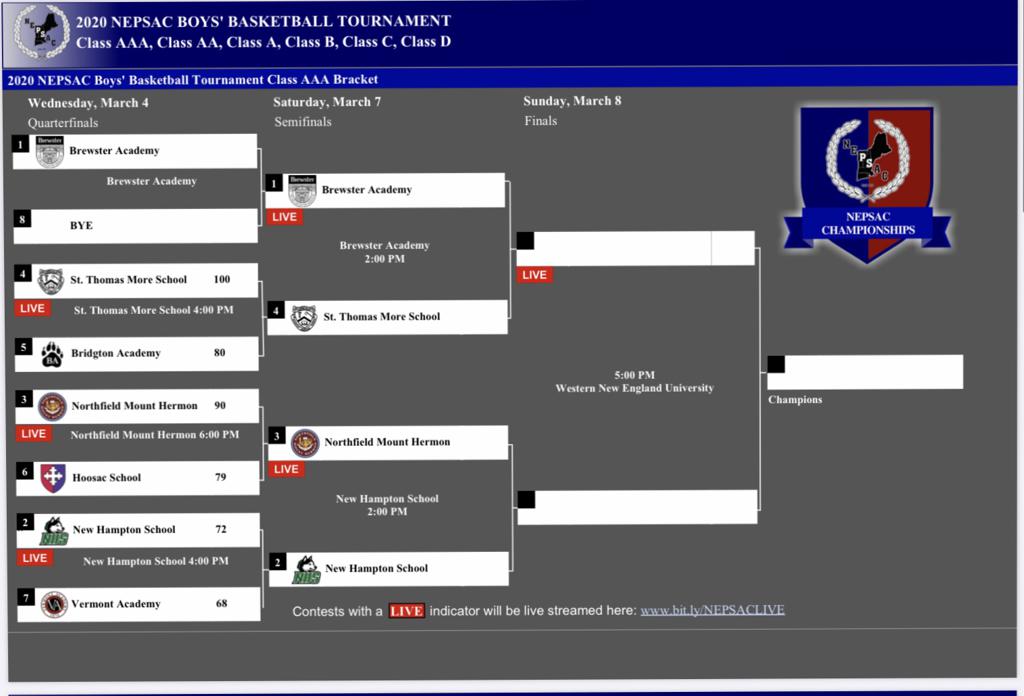 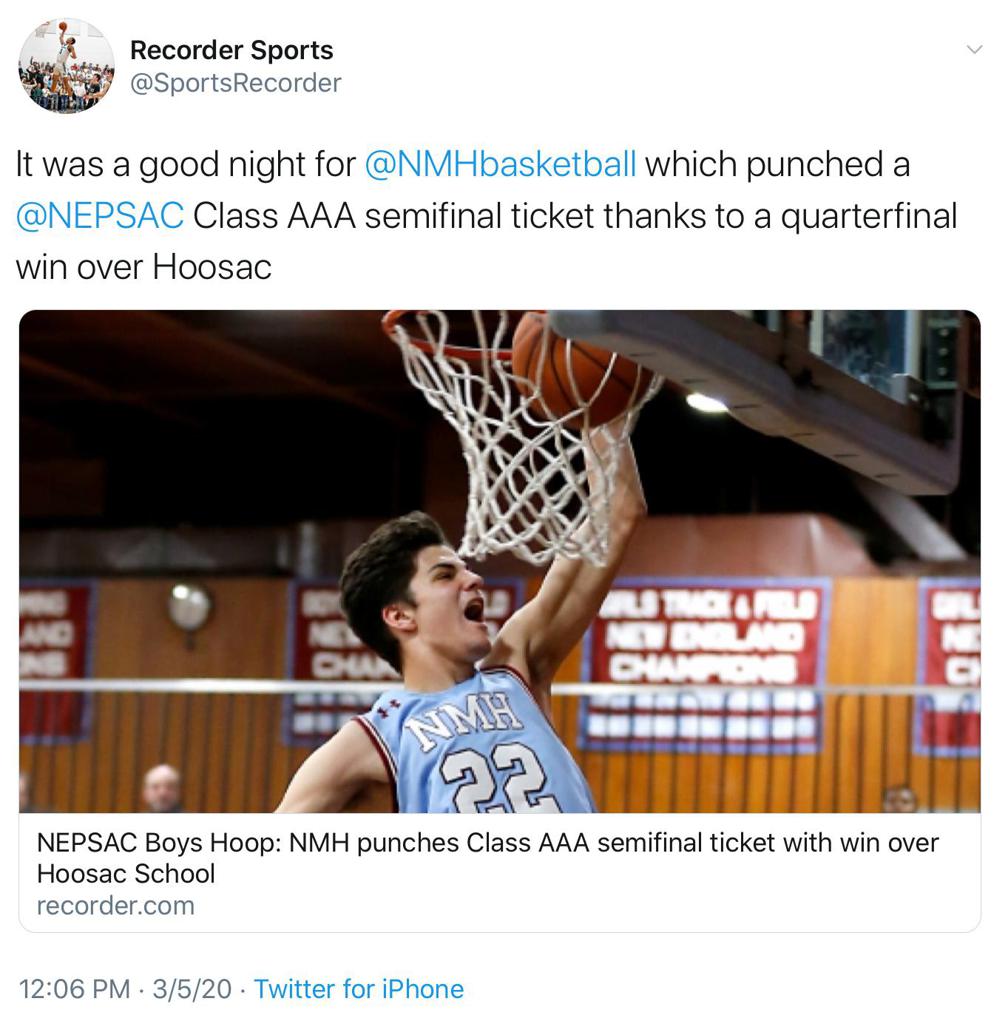 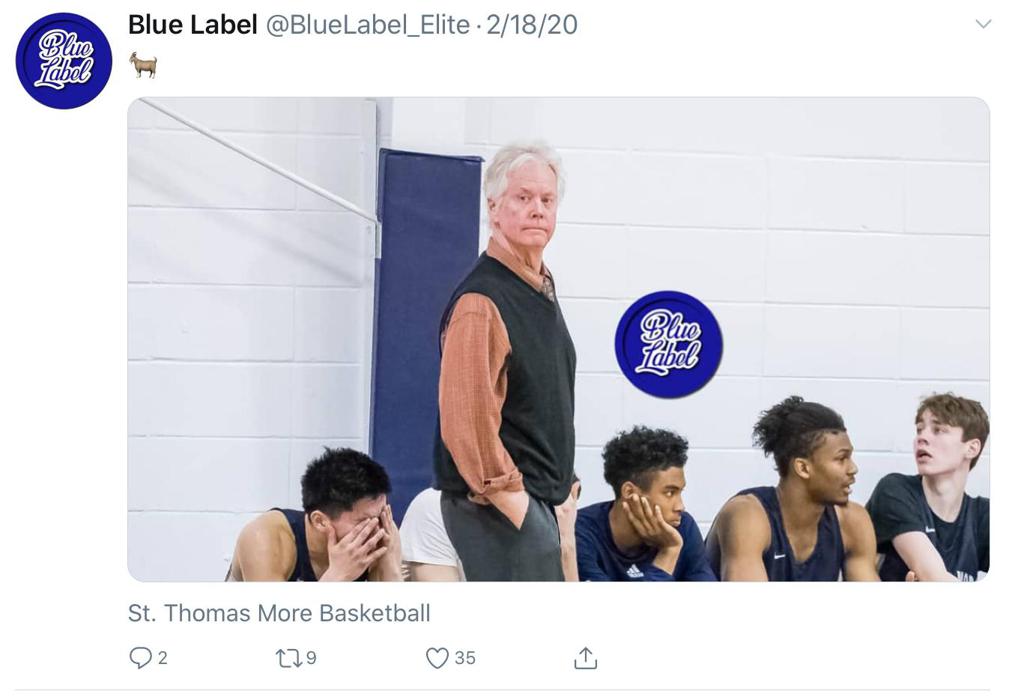 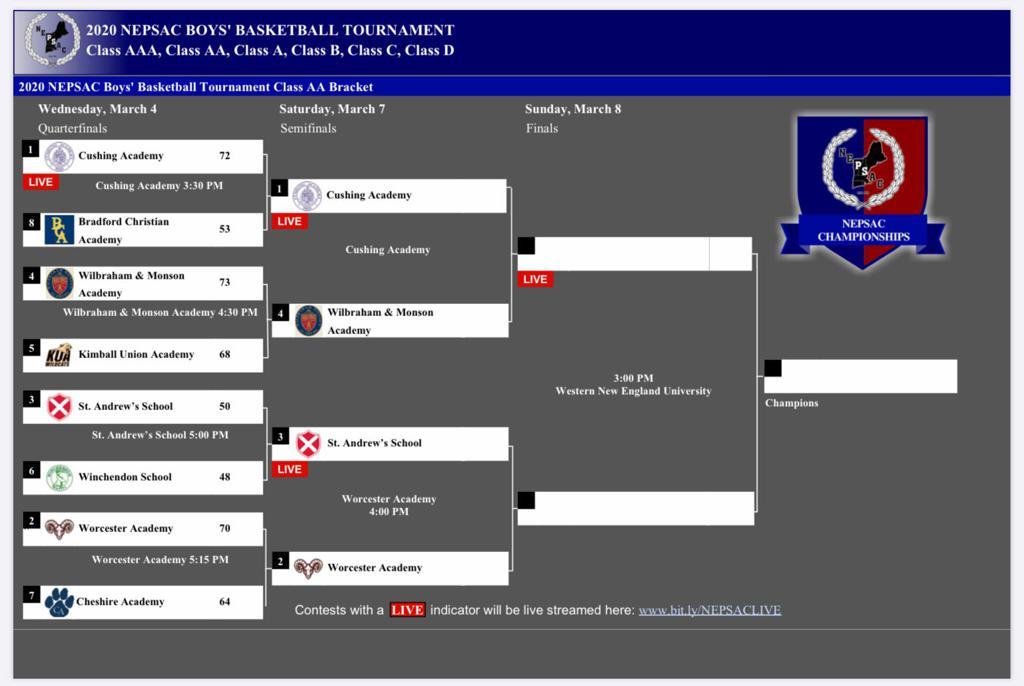 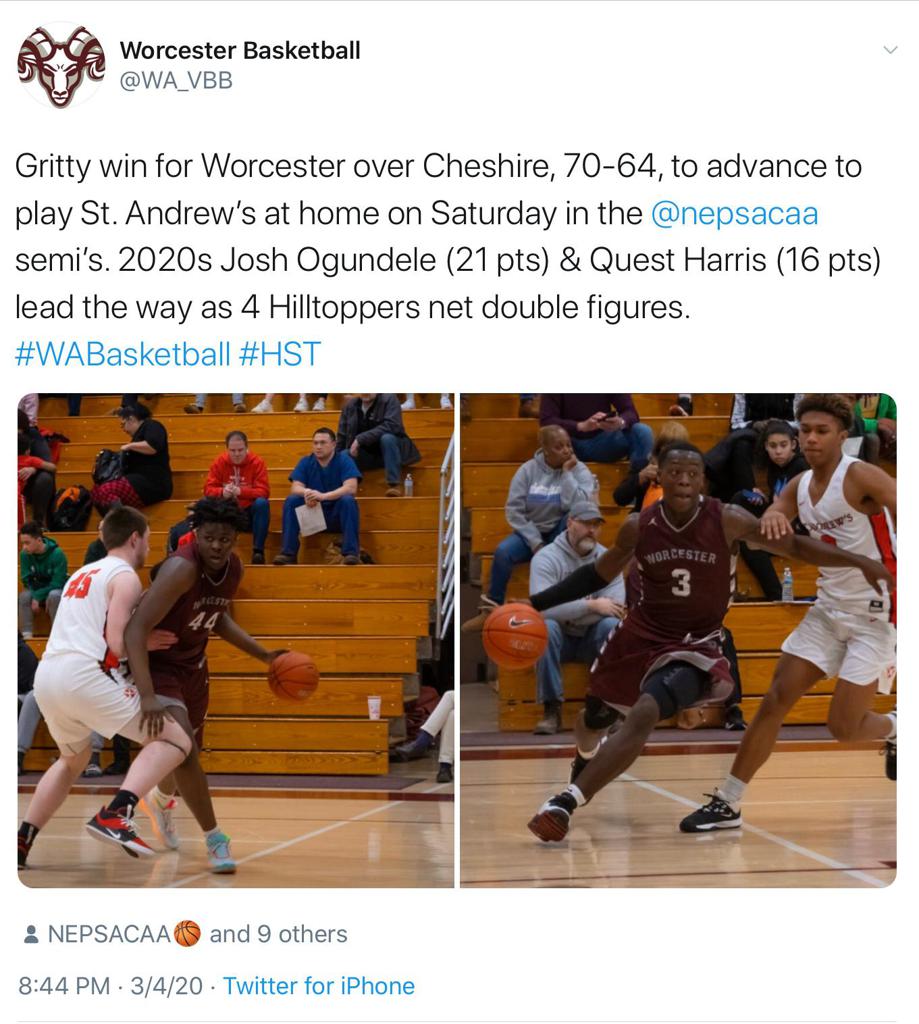 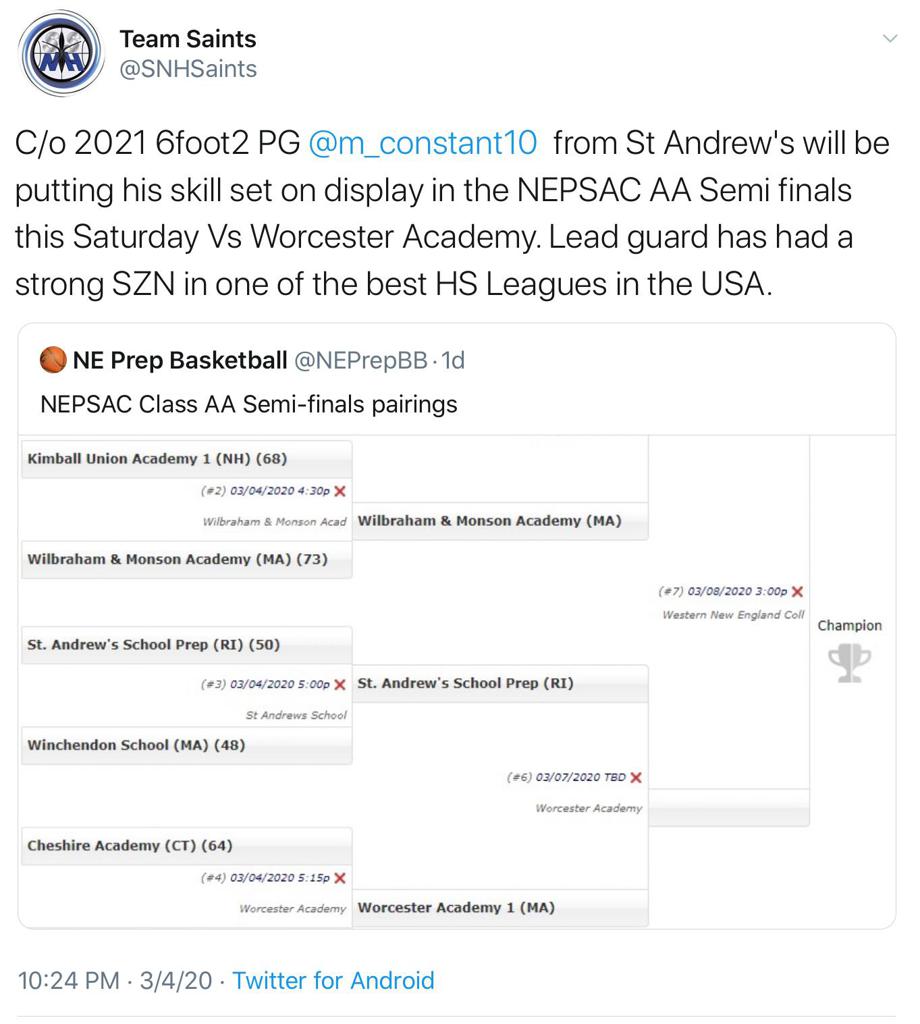 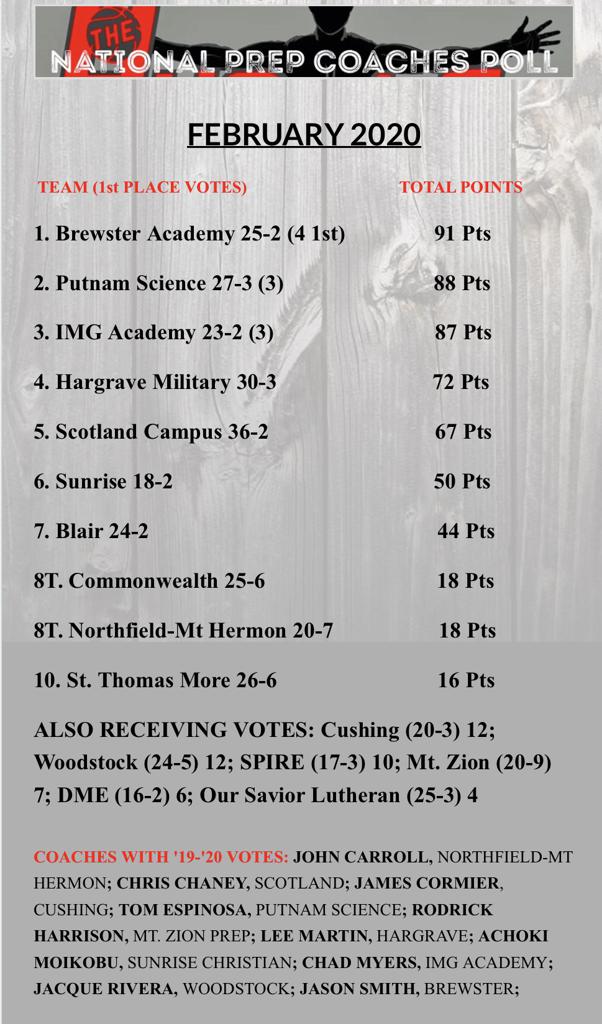