At the beginning of every prep season, dozens upon dozens of D1 coaches and NBA scouts flood the Albertus Magnus gym with the intentions of finding a player that will help change the trajectory of their program’s future. Whether they’re looking for a raw under-the-radar athlete or the next Prep-to-Pro prospect, the National Prep Showcase is stocked with talent on an annual basis. This year was no exception.

While guys like Terrence Clarke, Darlinstone Dubar, Jabri Abdur-Rahim, Woody Newton, Hassan Diarra and Matt Cross put together performances that helped cement their prospect status, we’re gonna focus on the uncommitted prospects who helped themselves in New Haven this past weekend.

Jahmyl Telfort, 6’7” Wing, New Hampton – It amazes me that Telfort doesn’t already own a dozen high-major offers and isn’t considered one of the best available prospects on the market. He’s a legitimate two-way weapon with a high motor and owns a unique skillset that will allow him to find immediate minutes at the next level. The fact that he took full advantage of the setting and shined in New Haven should help his recruitment going forward though. Telfort averaged 22 points, 6 rebounds and 3.5 assists while shooting 53.1% FG/36.3% 3pt/75% FT in New Hampton’s tough matchups against Hargrave and Blair.

Telfort received offers from Georgetown and West Virginia prior to his arrival in New England. Rhode Island and Temple are a few programs who have reached out after watching him over the weekend.

David N’Guessan, 6’9” Wing, Mt. Zion Prep – The rangy wing has always intrigued college coaches but,  now that his vast potential is starting to yield consistent high-level production, he’s on the verge of becoming one of the most sought-after recruits on the East Coast. Fortunately for N’Guessan, Mt. Zion HC Rodrick Harrison has some experience with high-ceiling perimeter prospects. A few years ago, Harrison refused to let Obi Toppin cruise through games and demanded that the 6’9” wing play with the ball in his hands as much as possible. Toppin is currently averaging 24 Pts/8.3 Reb.1.8 Ast/1.5 Blk for the Dayton Flyers and is expected to be selected in the 1st Round of the 2020 NBA Draft. While it’s unreasonable to predict the same future for N’Guessan, I can guarantee that Harrison will hold him to the same standard while he’s at Mt. Zion and his production over the weekend –averaging 14 Pts/11 Reb/2 Ast/2 Blk while shooting 50% from the field and 77% (7-9 FT) from the line- was just the beginning.

N'Guesson immediately reaped some rewards for his effort in New Haven by picking up offers from DePaul and VCU on Sunday.

Abou Ousmane, 6’9” Big, Scotland – The Brooklyn-native showed up to the National Prep Showcase in the best shape of his life and proceeded to play the best ball of his life in Scotland’s two matchups. Even the refs couldn’t stop Ousmane, who averaged 14 Pts/5.5 Reb/2.5 Ast/2 Stl in just over 22 minutes due to a few questionable fouls early in each game. The rugged big man showed off a smooth jumper out to 18-feet and went to work with efficient 1-on-1 moves in the post. Ousmane also proved that an offense can play through him and dropped a handful of creative dimes whenever he sensed a secondary defender closing in.

Ousmane has heard from a handful of high-major programs and will absolutely be able to provide value at that level as long as he continues to invest sweat equity in the weight room.

Jalen Leach, 6’4” PG/Wing, Tilton – Things started to pick up for Leach toward the end off the fall when he grabbed offers from Boston University, Brown, Robert Morris and New Hampshire. But if his performance at the National Prep Showcase is any indication for how the rest of his season is gonna go, those offers are just the tip of the iceberg. Leach dropped 26 points on 6-13 FG/2-6 3pt/12-14 FT to go along with 6 rebounds, 3 assists and 2 steals in a 102-82 win over Tilton.

Leach has always displayed a gorgeous, compact and simple shooting stroke but the way he attacked the rack over the weekend is a game-changer for the versatile playmaker.

Marty Silvera, 6’2” Point Guard, Putnam Science – After busting his ass to lose almost 30 pounds since the middle of the summer, Silvera got off to somewhat of a slow start in Putnam’s first handful of games. It seemed like he was still getting used to his new body, the same way anyone would if they went from driving a Hyundai to getting behind the wheel of a Ferrari. But all of that changed this weekend. Silvera averaged 21 Pts/5.5 Reb/3.5 Ast/2.5 Stl while shooting 51.8% FG/46.6% 3pt/70% FT in wins over Scotland Campus and The Skill Factory.

Silvera currently holds offers from St. Peter's, Iona, Bryant and UMass but will undoubtedly add to that list in the near future.

Tyson Brown, 6’9” Big, Massanutten – I got my first look at Brown at the Boston College Elite Camp this summer. There was definitely some potential but his entire body of work didn’t really move the needle for me. But by the end of this past weekend, my opinion was completely different. Brown, who comes equipped with a 7’+ wingspan, was aggressive in the post on both ends of the floor and came through with a ton of clutch plays for his team in a win over Worcester on Sunday. He also gave me every reason to believe that he’ll develop into a reliable threat as a shooter at some point in the future by hitting 10 of 14 from the FT line in two games.

Michael Jefferson, 6’7” Wing, Woodstock – After missing Woodstock’s game against Hargrave due to a black eye that was still swollen shut, Jefferson decided that anything was better than watching from the bench and begged his way into the lineup against Mt. Zion. He proceeded to score 14 points on 5-8 FG/4-4 3pt to go along with 2 steals and 2 rebounds in just 14 minutes of play. Jefferson is the type of unselfish energy-giver who will make any D1 program better as soon as he steps foot on campus.

Jefferson owned offers from Oklahoma State and Sam Houston State before heading to Woodstock but has flown under the radar heading into the season.

Jayson Woodrich, 6’7” Wing, Scotland – Ousmane wasn’t the only Scotland prospect to make a ton of noise in New Haven. Woodrich refused to let an open look go to waste and knocked down thirteen 3’s  (13-28 3pt/46.4%) over the course of two games. The 6’7” sniper averaged 27 points and grabbed 3.5 boards in matchups against VT Academy and Putnam Science.

Woodrich received offers from Bryant and Fairfield thanks to his dead-eye marksmanship. 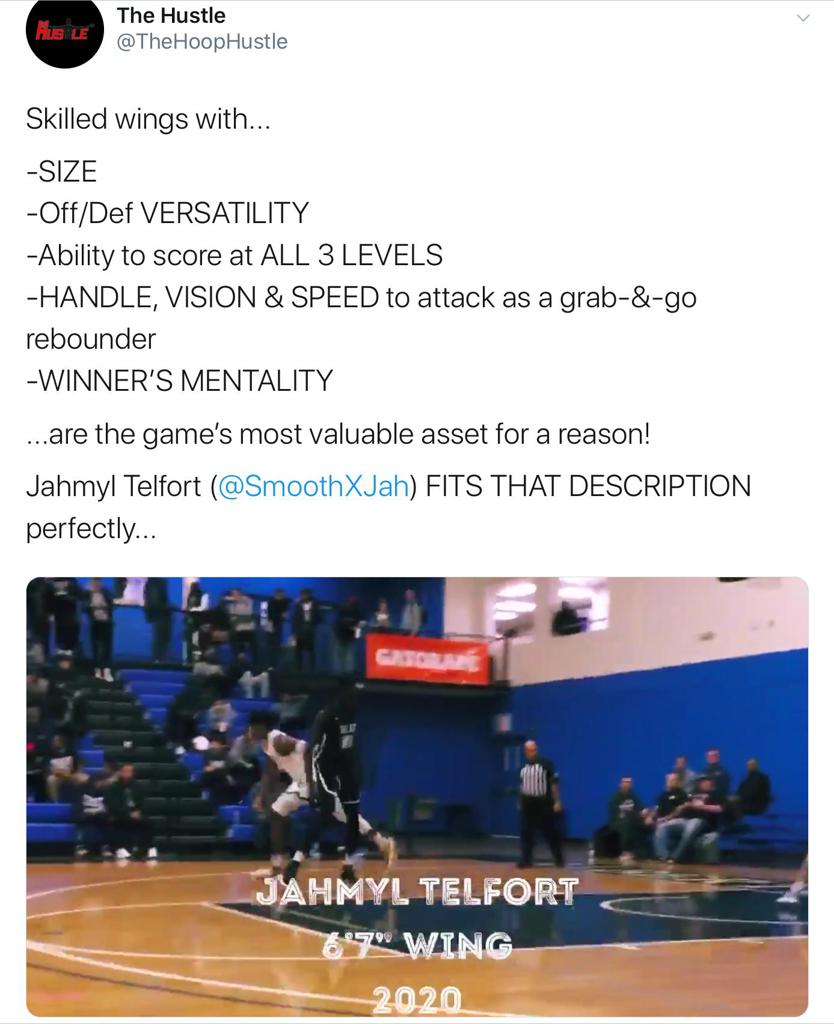 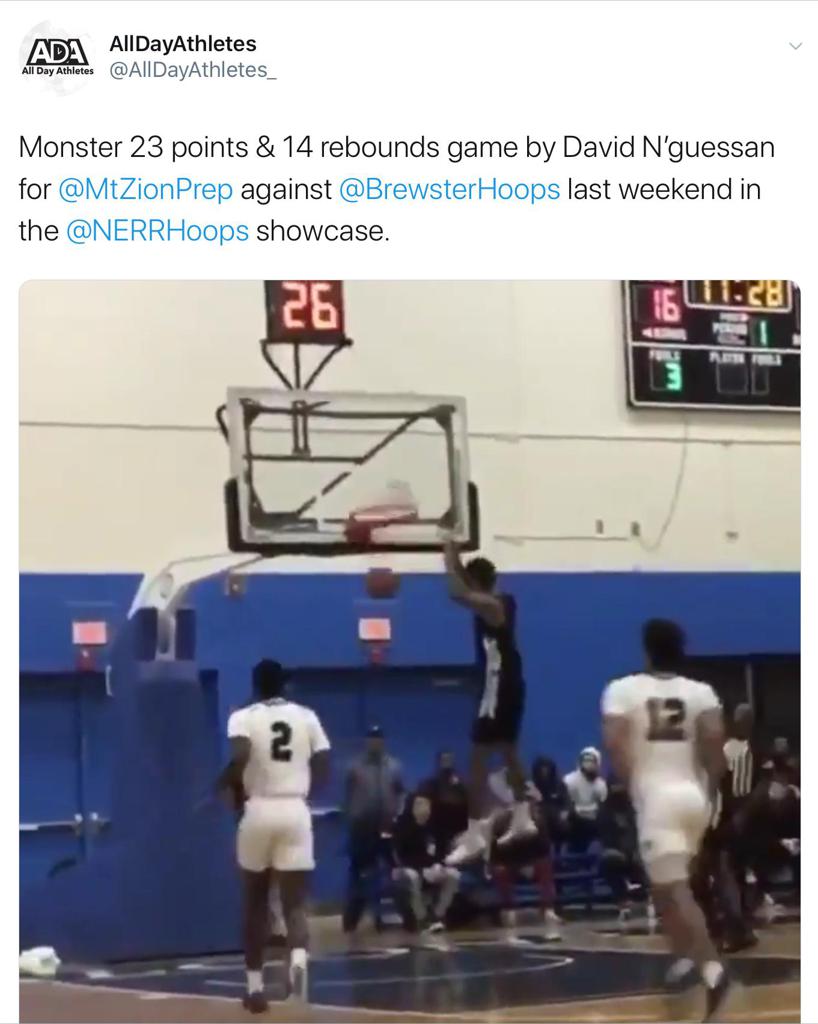 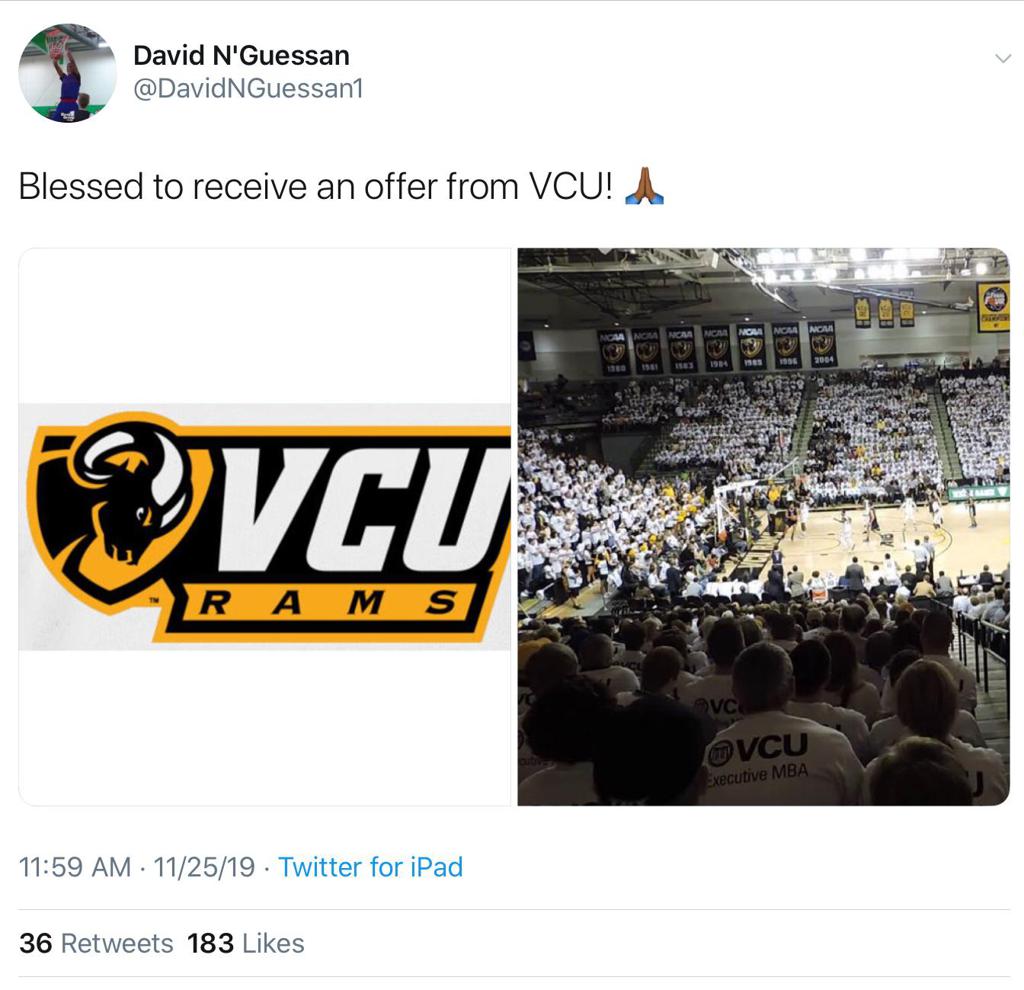 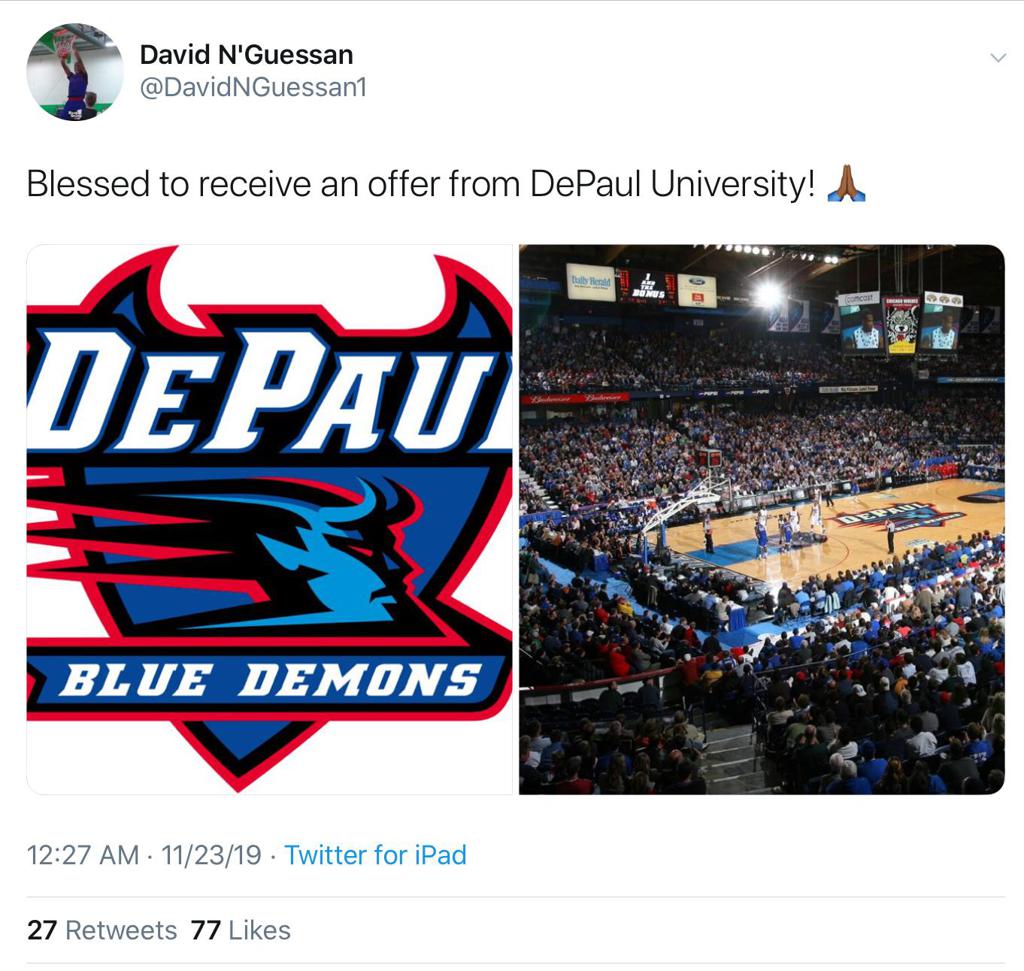 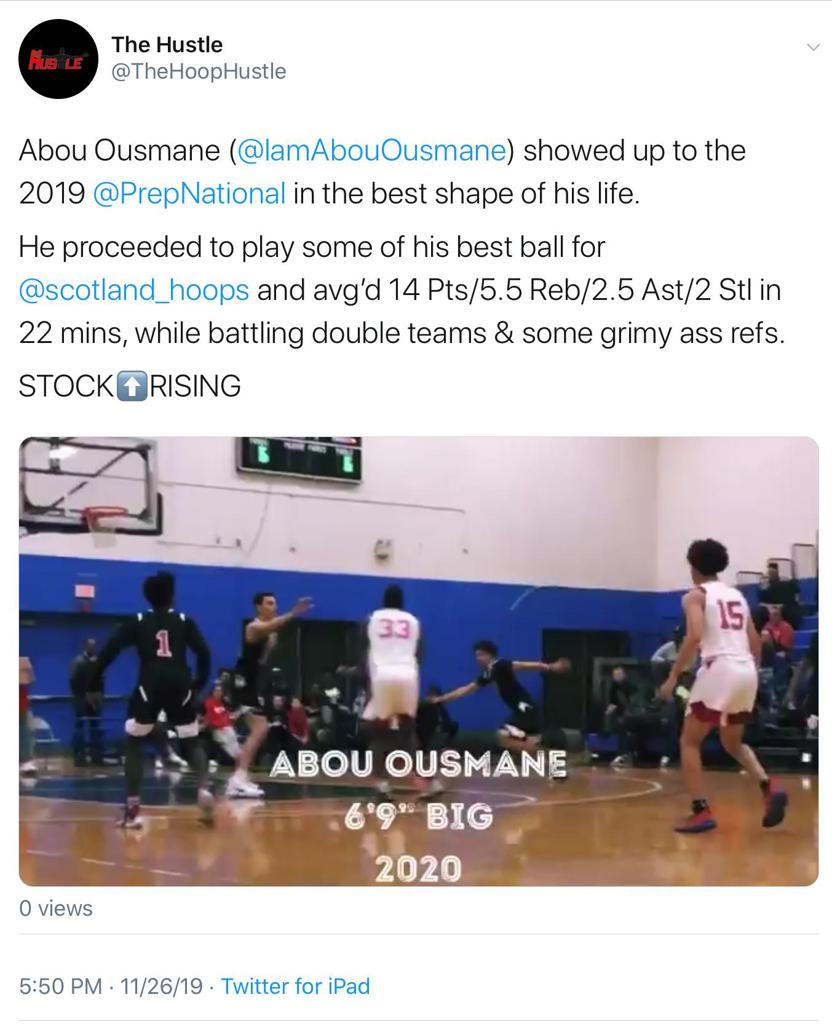 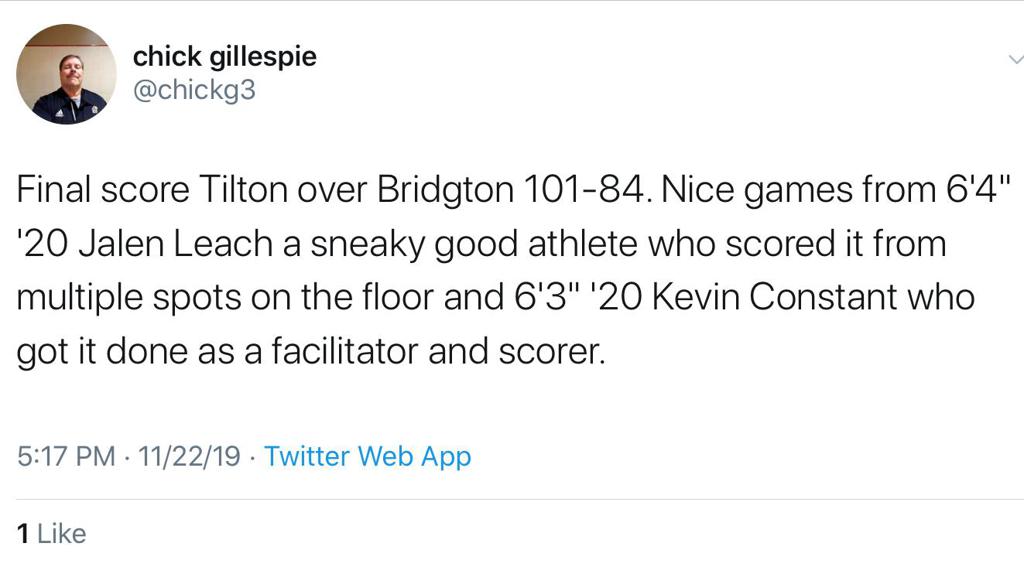 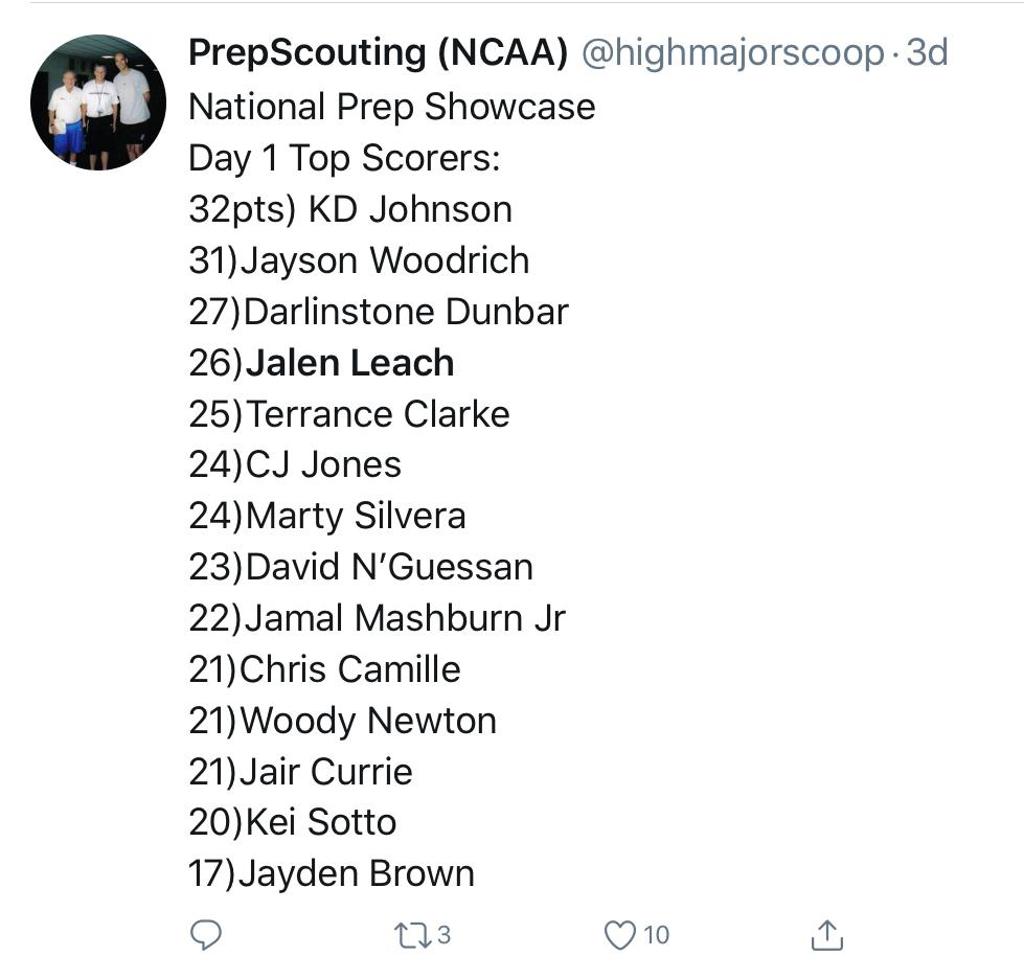 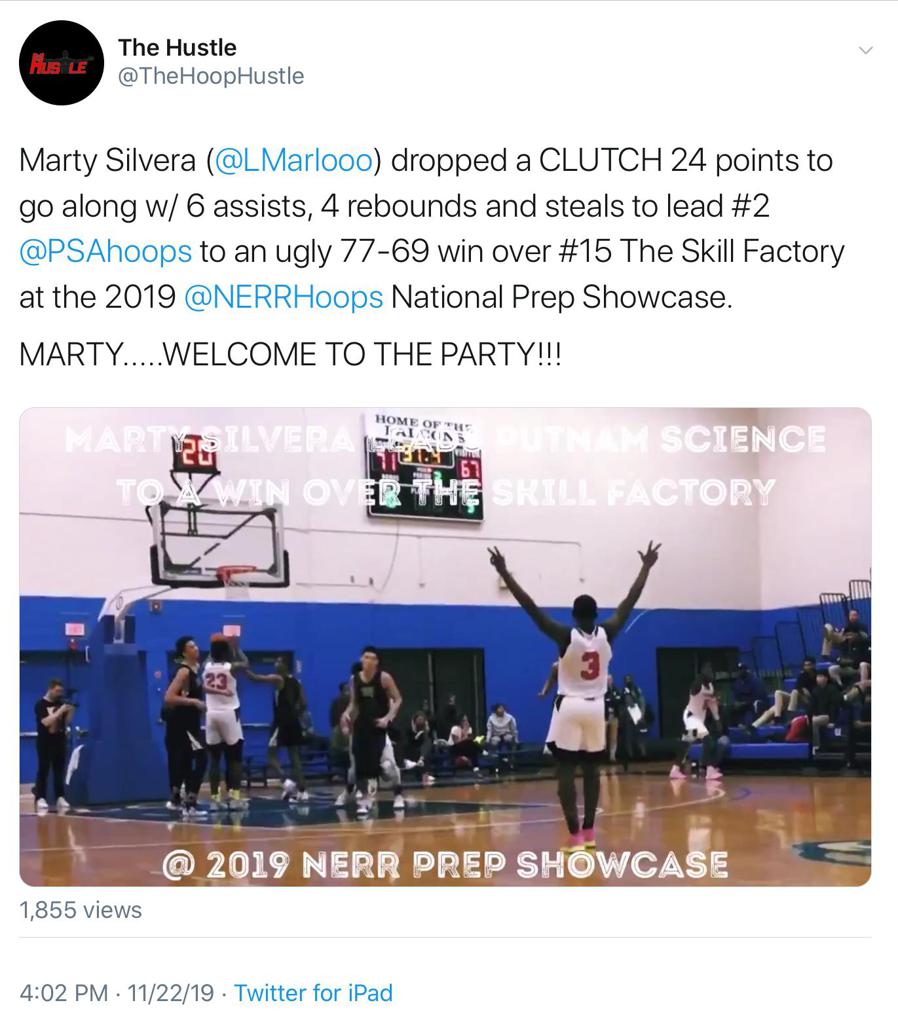 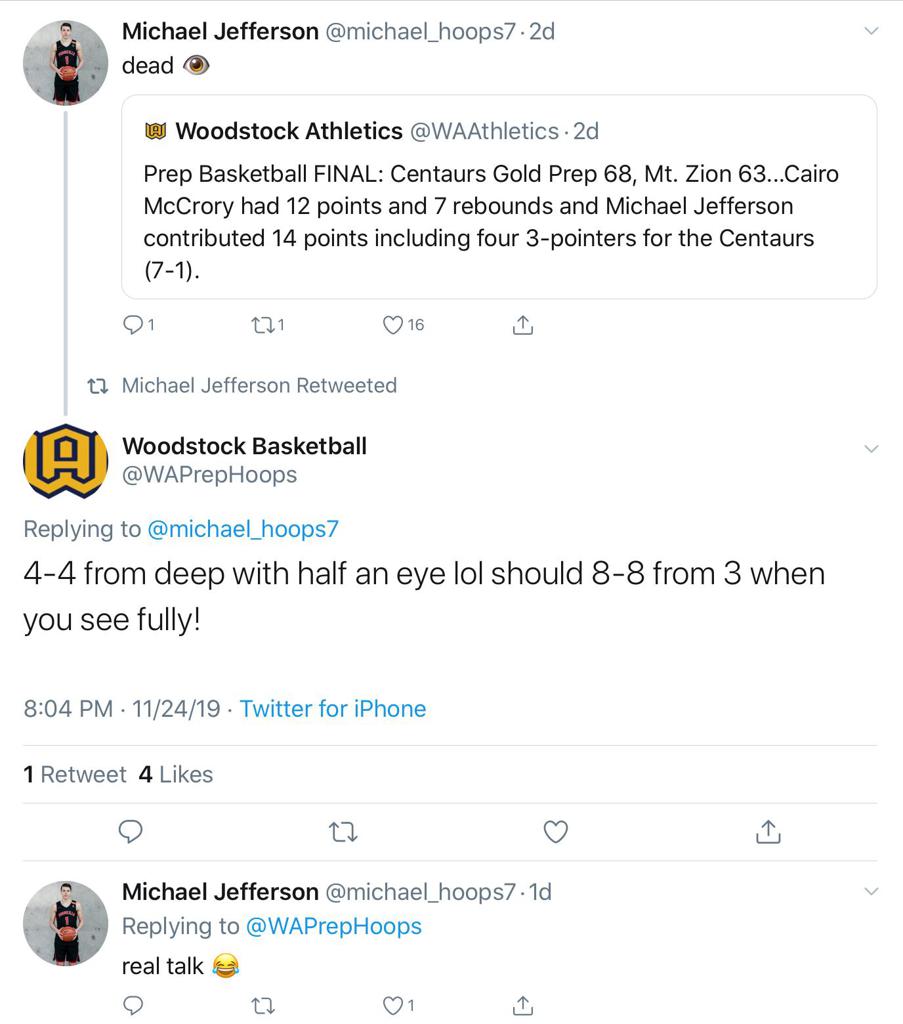 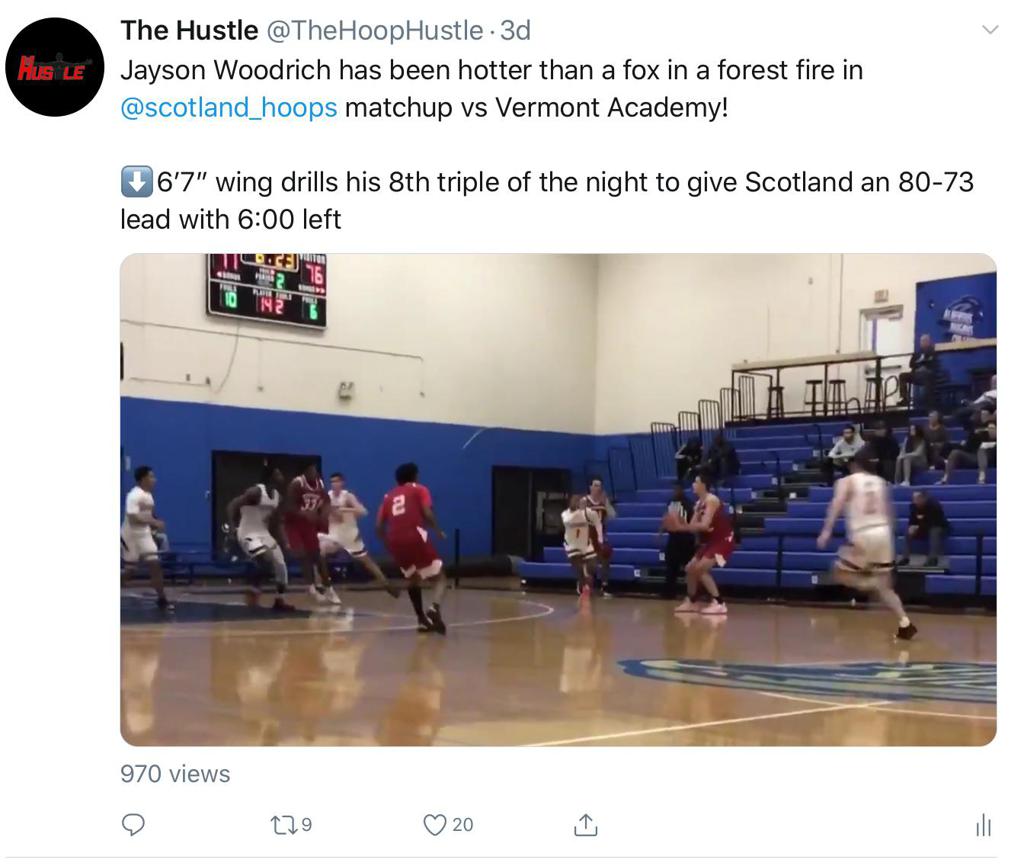